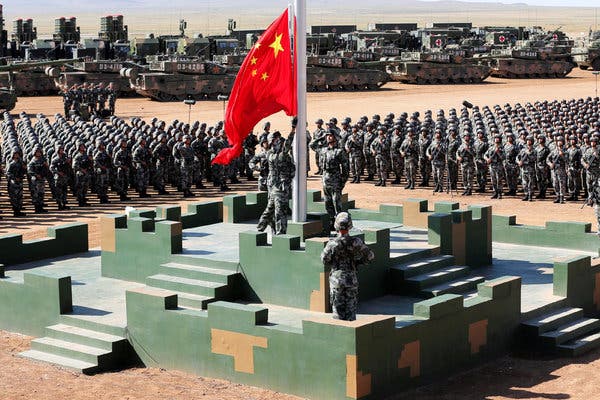 WASHINGTON — In a ballroom across from the Capitol building, an unlikely group of military hawks, populist crusaders, Chinese Muslim freedom fighters and followers of the Falun Gong has been meeting to warn anyone who will listen that China poses an existential threat to the United States that will not end until the Communist Party is overthrown.

If the warnings sound straight out of the Cold War, they are. The Committee on the Present Danger, a long-defunct group that campaigned against the dangers of the Soviet Union in the 1970s and 1980s, has recently been revived with the help of Stephen K. Bannon, the president’s former chief strategist, to warn against the dangers of China.

Once dismissed as xenophobes and fringe elements, the group’s members are finding their views increasingly embraced in President Trump’s Washington, where skepticism and mistrust of China have taken hold. Fear of China has spread across the government, from the White House to Congress to federal agencies, where Beijing’s rise is unquestioningly viewed as an economic and national security threat and the defining challenge of the 21st century.

A spotlight on the people reshaping our politics. A conversation with voters across the country. And a guiding hand through the endless news cycle, telling you what you really need to know.SIGN UP

The United States and China have been locked in difficult trade negotiations for the past two years, with talks plagued by a series of missteps and misunderstandings. Mr. Trump has responded to the lack of progress by steadily ratcheting up American tariffs on Chinese goods and finding other ways to retaliate. China has responded in kind.

The two sides now appear far from any agreement that would resolve the administration’s concerns about China, including forcing American companies operating there to hand over valuable technology. Even if a deal is reached, the two sides are busy constructing broader economic barriers.

In addition to placing a 25 percent tariff on roughly half of the goods China exports, the United States has restricted the kinds of technologies that can be exported to China, tried to cut off some Chinese companies, like telecom giant Huawei, from purchasing American products and rolled out hurdles for Chinese investment in the United States.

American intelligence agencies have also ratcheted up efforts to combat Chinese espionage, particularly at universities and research institutions. Officials from the F.B.I. and the National Security Council have been dispatched to Ivy League universities to warn administrators to be vigilant against Chinese students who may be gathering technological secrets from their laboratories to pass to Beijing.

The administration paints the crackdown as necessary to protect the United States. But there are growing concerns that it is stoking a new red scare, fueling discrimination against students, scientists and companies with ties to China and risking the collapse of a fraught but deeply enmeshed trade relationship between the world’s two largest economies.

“I’m worried that some people are going to say, because of this fear, any policy is justifiable,” said Scott Kennedy, a China expert at the Center for Strategic and International Studies. “The climate of fear that is being created needs to help generate the conversation, not end the conversation.”Concern over China’s ambitions as an economic and military power has spread across Washington, fueling what some say could be a new Red Scare.CreditChina Daily/Reuters

Anti-China sentiment has spread quickly, with Republicans and Democrats, labor union leaders, Fox News hosts and others warning that China’s efforts to build up its military and advanced industries threaten America’s global leadership, and that the United States should respond aggressively. Skepticism has seeped into nearly every aspect of China’s interaction with the United States, with officials questioning China’s presence on American stock markets, its construction of American subway cars and its purchase of social media networks.

Yet there is little agreement on what America can or should do. The United States has tried for decades to entice and cajole China to become a more open society, but the Communist Party has steadily tightened its grip over the Chinese people and the economy. American leaders now face a choice of whether to continue down a path of engagement that could leave the country vulnerable to economic and security threats — or embark on a path of disengagement that could weaken both economies and might one day even lead to war.

An increasing number of people in Washington now view the decoupling of the two economies as inevitable — including many of the members of the Committee on the Present Danger. At an inaugural meeting in April, Mr. Bannon, Senator Ted Cruz of Texas, Newt Gingrich, the former House speaker, and others issued paeans to Ronald Reagan — a former member of the group — and were met with standing ovations as they called for vigilance against China.

They praised Mr. Reagan’s Cold War victory over the Soviet Union and his doctrine of “peace through strength,” but there was also an air of inevitability that war might come, only this time with China.

Mr. Bannon was just off the plane from Rome, with a slight shadow of a mustache and his silver hair brushed back. Clad in a black button-down and long black suit jacket, he thumped the podium as he described China as a rising power and the United States as a declining power that would inevitably clash.

“This is the defining event of our time, and 100 years from now, this is what they’re going to remember us for,” he said.

The committee’s two earliest iterations, in the 1950s and again in the 1970s, called for an arms buildup to counter the Soviets. The second iteration, formed over a luncheon table at Washington’s Metropolitan Club in 1976, issued documents warning against Soviet expansionism, with titles like “Is America Becoming Number 2?”

The group reached the height of its influence during the Reagan administration, in which dozens of its members eventually held posts, including as the national security adviser and C.I.A. director. But as the Soviet threat faded, so did the committee.

The group was briefly active again starting in 2004, this time to warn against the threat of Islamic extremism. The committee’s vice chair, Frank Gaffney, is the founder of the Center for Security Policy, a think tank that argues that mosques and Muslims across America are engaged in a “stealth jihad” to “Islamize” the country by taking advantage of American pluralism and democracy.

The group’s activity largely died down until concern over China rekindled interest.

Today’s committee acknowledges that the threat from China is different from Soviet Russia because the American and Chinese economies are much more integrated. But Washington is increasingly reaching back into the Cold War toolbox to confront the threat.

The administration has placed Chinese tech companies on an “entity list,” essentially blacklisting them from doing business with American firms. In keeping with a law passed last year, the administration has increased its checks of Chinese investment, including of minority stakes in American companies. Last June, the administration began restricting visas for Chinese graduate students in sensitive research fields like robotics and aviation. And the United States has begun barring Chinese academics from the United States if they are suspected of having links to Chinese intelligence agencies.

“They’re not the Soviet Union. But this kind of government control, statism, never works for long,” Larry Kudlow, the White House chief economic adviser, said in a July 16 interview with Sinclair Broadcast Group. The possibility that China could collapse like the Soviet Union has “always been an undercurrent” in the trade war, he said.

The new Cold War has not been one-sided. Many of the changes in Washington have been triggered by a darker turn in Beijing.

China has increased its scrutiny of American firms, and many American companies and their employees in China now fear reprisal. In addition to detaining millions of Chinese Muslims, democracy activists and others, Chinese authorities have jailed foreign diplomats, academics and businesspeople — prompting some to cancel or delay trips to China.

China is also projecting its power abroad, funding global infrastructure and constructing an archipelago of artificial islands with giant air bases reaching almost to the shores of Malaysia and Indonesia. Beijing has made it clear that it intends to help its companies dominate the industries of the future, from artificial intelligence and supercomputers to aerospace equipment. Its policies have sought to replace imports of high-tech products with Chinese-made goods, pressuring multinationals to move factories from the United States and resulting in the loss of American jobs.

China has rejected entreaties by the Trump administration to curb these activities, arguing that it is simply pursuing its own economic development. In an interview after trade talks broke down in May, Liu He, China’s top negotiator, said that areas of disagreement between the United States and China focused on “major matters of principle” on which China was unlikely to bend.

The chill in relations has begun to weigh on Chinese investment in the United States, along with Chinese students and tourism. Chinese investment in American residential and commercial real estate has begun to decline. Companies are increasingly diversifying away from China, wary of the president’s ongoing economic war.The United States and China have been engaged in a protracted trade war, with Washington accusing Beijing of breaking a deal earlier this year.CreditErin Schaff/The New York Times

Nintendo, GoPro, Hasbro and other companies are reconsidering factories in China, choosing to source products from Vietnam, the United States, Mexico and India instead.

Susan Shirk, the chair of the 21st Century China Center at the University of California at San Diego, said the United States is at risk of being gripped by “an anti-Chinese version of the Red Scare” that is driving Chinese talent away and could rupture what little good will is left between the two countries.

“We’ve made this mistake once before, during the Cold War,” Ms. Shirk said. “And I don’t think we should make it again.”

Chinese nationals and Americans of Chinese heritage say they have felt the chilling effects. Some suspect they are being passed over for promotions and grants. Supporters of engagement have been dismissed as apologists or even traitors.

“Chinese Americans feel targeted,” said Charlie Woo, chief executive of Megatoys and a member of the Committee of 100, an organization of prominent Chinese-Americans. “And that’s really hurtful.”

The Trump administration and the Committee on the Present Danger have been careful to say their targets are the Chinese government and the Communist Party, not the Chinese people. But the distinction can be a difficult one to make. In the rush to protect against new threats from China, the line between preparedness and paranoia is sometimes unclear.

At a Senate hearing last year, Christopher A. Wray, the F.B.I. director, said the Trump administration was trying to “view the China threat as not just a whole-of-government threat, but a whole-of-society threat,” adding, “I think it’s going to take a whole-of-society response by us.”

Many Chinese people and their defenders have bristled at the implication that the entire Chinese society poses a national security threat.

Toby Smith, vice president for policy at the Association for American Universities, said that American universities were working hard to remain vigilant to espionage threats, but that they thrive on openness and access to talent and science from around the world — including from China.

“The situation with China is different than the Cold War,” he said. “The concern with the Soviet Union was primarily military. Now it’s a concern about economic competitiveness.”