Animals Trapped Alive In Keychains Sold For $1.50 In China 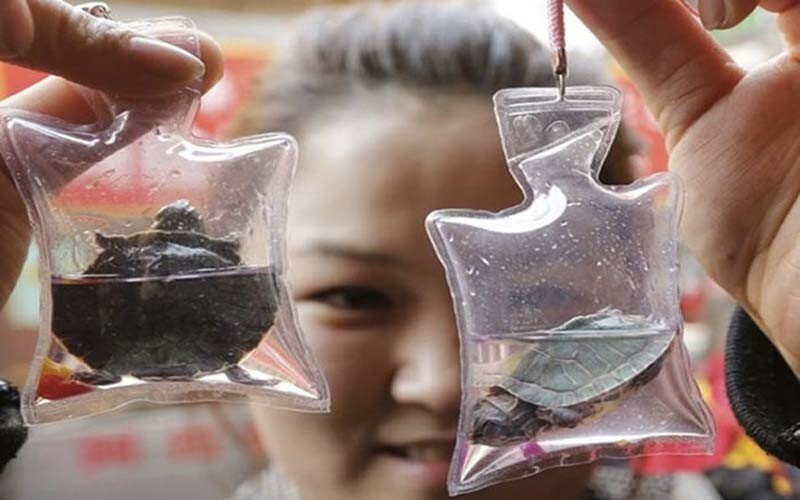 A strange trend in China has caught on, and many people in other areas of the world are horrified. Animal rights activists are especially upset that people in China are keeping live fish, turtles and other amphibians as keepsakes on their keychains.

These charms are simply little plastic bags that contain just enough water to allow the animal to survive.

The bag also contains a small amount of crystallized oxygen and other nutrients to keep the animals barely alive. However, the creature is trapped in a tiny prison for the amusement of its owner.

The animals only actually survive for a short amount of time in their tiny prison, so if the owner wants their pet to survive, they must cut it out of the plastic.

Unfortunately, not everyone takes this measure. Some people simply let the animals die and then throw them away.

These strange keepsakes are often sold outside of train and subway stations for as little as $1.50.

Qin Xiaona, director of the NGO Capital Animal Welfare Association said that these keychains were still legal because only wild animals are protected in China, and these animals do not fall under that classification.

“China only has a Wild Animal Protection Law. If the animals are not wild animals they fall outside the law’s scope,” Qin explained.

A petition to end the sale of these disturbing keepsakes has already reached over 1 million supporters.

According to Snopes, these strange keychains started hitting the market a few years ago, around 2012.

However, some sources, such as PETA, insist that these products were seen as early as 2008, when the trinkets were sold to tourists who came to watch the Olympic games.

The fact checking website also pointed out that it is difficult to tell exactly how widespread these keychains are in the country, just by reading a collection of news reports.

David Cohen is a long-time independent journalist and expert in geopolitics, technology and finance. Cohen began his career as an activist, and then began writing articles as a freelancer for numerous websites. Cohen is a native of Brooklyn, New York and a graduate of Cornell University.