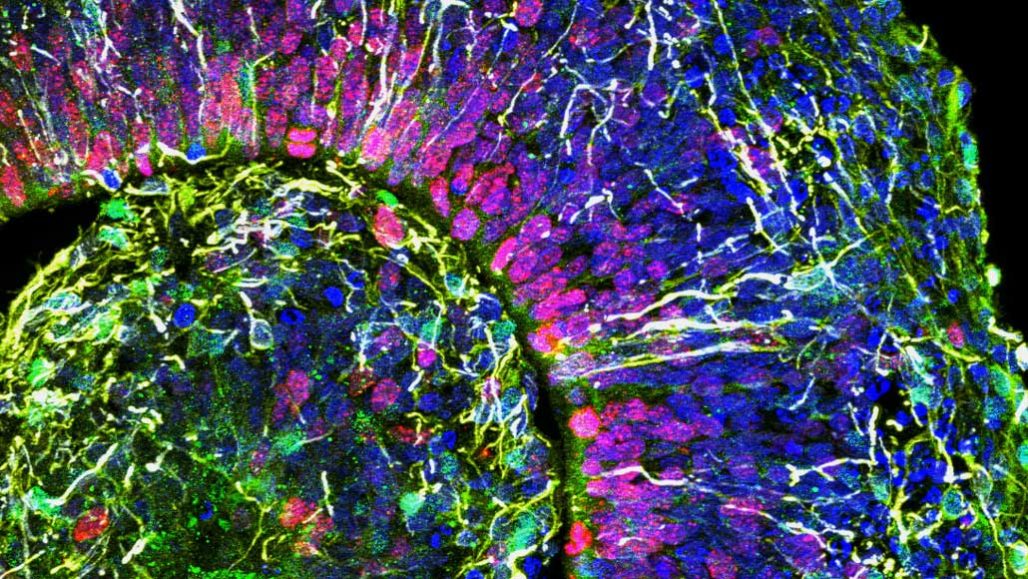 As lentil-sized clusters of nerve cells grow in a lab dish, they begin to fire off rhythmic electrical signals. These oscillations share some features with those found in the brains of developing human babies, researchers report October 3 in Cell Stem Cell.

Three-dimensional spheres of human brain cells, called cerebral organoids, are extremely simplistic models of the human brain. Still, these easy-to-obtain organoids may offer a better way to study how a brain is made, and how that process can go wrong (SN: 2/20/18).

“The field is white-hot,” with fast progress in both making and understanding brain organoids, says John Huguenard, a neuroscientist at Stanford University not involved in the study.

Headlines and summaries of the latest Science News articles, delivered Tuesdays and ThursdaysE-mail*GO

Finding this sort of coordinated electrical activity in organoids’ nerve cells, or neurons, is a first, he says. “The neurons are growing up and becoming mature enough where they can not only start to behave like neurons and fire individually, but now they can be coordinated.”

For the study, researchers coaxed stem cells into forming some of the neurons that make up the outer layer of the brain. These cortical organoids grew in lab dishes that held arrays of electrodes printed along the bottom, allowing the scientists to monitor electrical activity as the organoids developed.

After two months, the electrodes started picking up neural waves, or collective behavior that comes from many neurons firing signals in tandem. By four to six months, the electrical activity in the lab-grown cells had reached levels “never seen before,” says coauthor Alysson Muotri, a neuroscientist of the University of California, San Diego. Those signals suggest that neurons in the organoids had made billions of connections, he says.

At nine months, the organoids exhibited electrical activity that echoed the brain activity of newborn babies. Mathematical models suggest that “the organoid is evolving in the same way as the human baby brain would, reaching levels that are similar to a newborn baby’s by nine months,” Muotri says.

Although the organoids can live in the lab for several years, their electrical activity plateaus around nine months, Muotri says. Further refinements would be needed for the organoids to develop more fully.

These organoids, each about a million times smaller than a human brain, lack the complex combination of cells that help shape neural waves in people. Muotri and his colleagues are exploring ways of boosting the complexity, perhaps by adding more types of cells or a blood supply. And the scientists are stimulating the organoids, delivering signals akin to those that neurons might receive from other brain regions or the outside world — forces known to sculpt the growing brain.

The research “provides a starting framework for analyzing how these neural networks form,” says neuroscientist Mark Hester of Nationwide Children’s Hospital in Columbus, Ohio, whose work also involves electrical signals created by maturing brain organoids. It’s important to remember, though, that these organoids are not the real thing, but merely a model, he says. “It’s not a miniaturized brain that we’re looking at.”