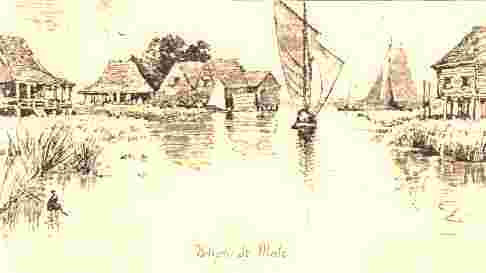 Views from the Edge

A hurricane wiped out St. Malo in Louisiana, the first permanent Asian American settlement in the United States, leaving nothing to indicate that it ever existed. That lost chapter of US history is about to receive new recognition.

On Nov. 9, the Philippine-Louisiana Historical Society is going to erect a historical marker for St. Malo, to indicate the location of the fishing village established by Filipino sailors in the swamps south of New Orleans.

It will be the second marker for the villages occupied by the Filipino sailors, or Manilamen as they were called. The first marker was for the larger settlement Manila Village. Located in front of the courthouse in the Town of Jean Lafitte, the Manila Village Marker describes Filipino life in the region after the migration of the first settlers.

The establishment of the St. Malo Marker is in keeping with the mission of the PLHS to share the history of Filipinos in the Bayou State.

The St. Malo marker will be placed at the Los Isleños Museum Complex at 1345 Bayou Road, St. Bernard, LA. The marker aligns with the Los Isleños Heritage and Cultural Society’s mission to recognize the varied histories and cultures that helped shape the area.

“To understand the history of St. Bernard Parish, you have to know about the Filipinos that first settled here. They are part of our cultural identity,” said William Hyland, St. Bernard Parish Historian and Director of the Los Isleños Museum Complex.

“Filipinos lived alongside Isleños for many generations. They intermarried and influenced each other.”

The exact date for the settlement of St. Malo is not known. Filipino men began arriving in Louisiana as early as 1765, arguably establishing the first Asian community in North America. Local historians say the brown swampmen volunteered to fight on the side of the US in the Battle of New Orleans in the War of 1812. By the 1830s the settlements were well established by the Filipinos who had escaped the severe treatment by captains of the Spanish galleons.

The huge galleons plied the Pacific from the Philippines to Acapulco. The galleons’ cargo was transferred overland to the Caribbean where they were loaded onto other vessels that shipped the gold, spices and exotic food to Spain. In Spanish records, the crewmen were excellent sailors and were referred to as Luzones Indios or “chinos.”

It is uncertain what drew the Filipino escapees to the swamps of the Mississippi delta, but the maze of channels and (at the time) thick vegetation provided an excellent hiding place that was difficult to find.

Lacfcadio Hearn, a journalist and writer for Harper’s Weekly wrote extensively about Louisiana cuisine, voodoo, and other local topics. He visited Saint Malo in 1883 and recorded his impressions of the settlement in an article for Harper’s Weekly. The article makes for a great read (and can be found here). Charles Whitney, an artist accompanying Hearn, provided the sketches of St. Malo and Manila Village.

The Filipinos married into local Cajun families and took up residence in southern Jefferson and Plaquemines Parishes. In the complex racial and ethnic hierarchy of Southeastern Louisiana, Louisiana’s Filipinos were considered to be White, and were thus allowed to marry White women, as most did. Despite widespread intermarriage, many Louisianans of Filipino descent have maintained strong ties to the Philippines, their language, and their culture, and were reinvigorated by more recent immigrants from the Philippines.

The marker dedication will  be free and begins at 10:30 a.m., Nov. 9 and will feature cultural performances and historical accounts and displays prepared by the PLHS and the local Filipino American community organizations. Refreshments will be provided.

A more formal event will take place later in the day.

What: An evening gala will feature Filipino food and folk dances