I keep coming back and commenting this over and over, hoping more people take heed. Decided to finally make a post in hopes a few people will read it.

This dip is NOT about the FOMC meetings or heightening tensions with Russia. Those are short term catalysts.

The real problem is inflation.

Everyone with a formal education in economics and finance knows it, but they are not going to say it because panic from the top won't help anyone. AND RIGHTLY SO.

I swear to God 90% of the investors and traders on reddit don't understand the basics of monetary policy and the risks associated with compounding inflation.

You have to understand that our entire central banking system, and government financial structure is all based on controlling price levels with interest rates.

If inflation runs away, interest rate hikes are the ONLY proven tool to get it under control.

We have not seen this s**t in 40 years, and last time we did interest rates had to go to 20% in a "shock and awe" style monetary tightening.

Everyone who knows anything about public finances knows that we will all be cavemen if interest rates go to 20%. That means we cannot do that again this time. And THAT means we have no idea how to stop this inflation if it doesn't stop itself.

EDIT: Added some comments to prove the above point. Here is a source for the reality of the US debt situation, and what will happen if interest rates return to their historical mean of 5%. This is from a report written by the non-partisan US congressional budget office. and it was written BEFORE the stimulus packages were passed and accounted for. These are projections for the relationship between debt and GDP. This is NOT a graph of absolute deficit levels. This is a graph of the US government going bankrupt if interest rates go too high. 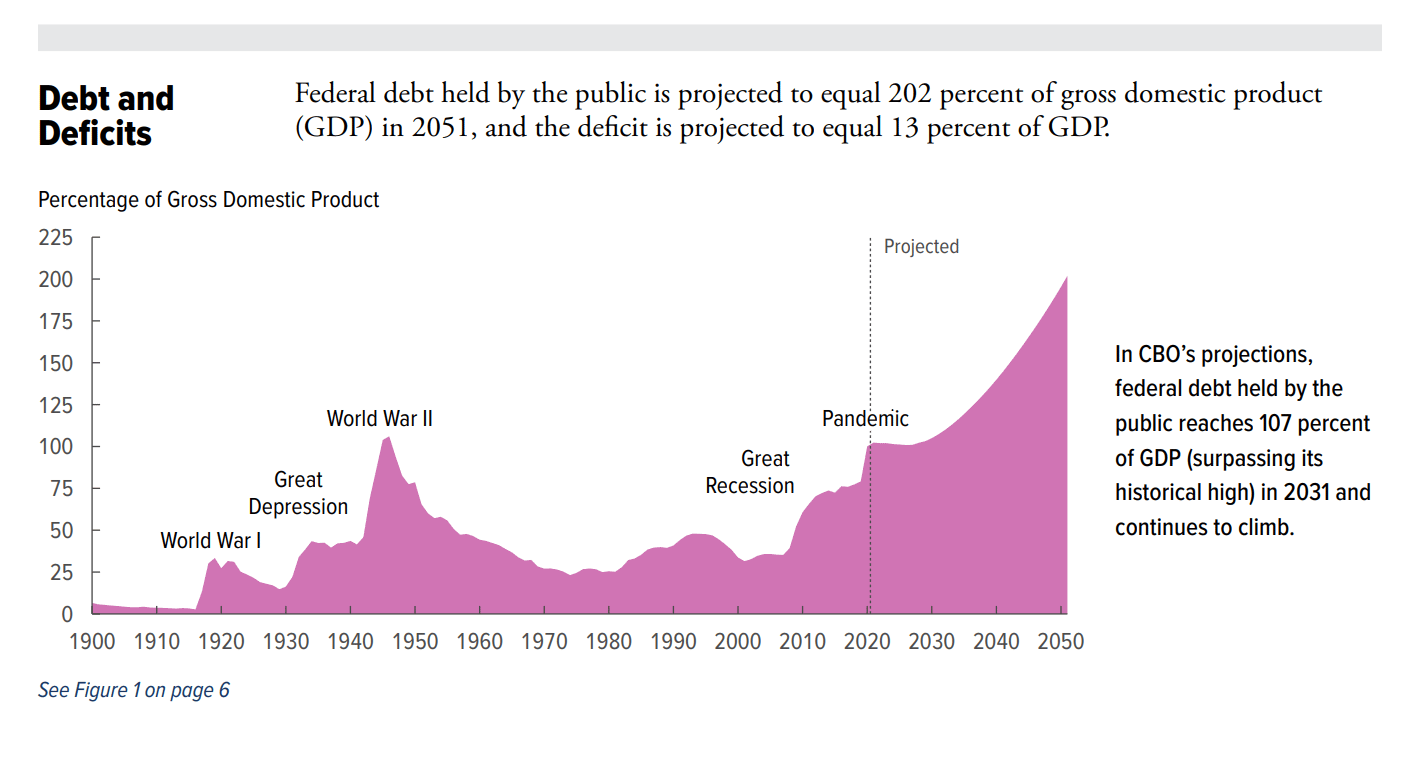 The above graph explains to you in one image why the US government cannot and will not raise interest rates meaningfully. (But there's even more reasons than that. A lot more.)

THIS IS A MONETARY PICKLE OF d***o PROPORTIONS.

Until inflation comes down materially, do not expect the markets to be anything but b****y.

Inflation started taking off in March and April of last year. Watch for the month to month changes to start flattening then, because we will be comparing to an already increased month in 2021.

Conversely, if we are still getting increasing monthly YOY reads (7%+) on the March and April numbers (which are reported in April and May respectively), that is when all h**l will break loose, because it will be an indication that the fed is genuinely losing control.

PAY ATTENTION TO INFLATION, AND LISTEN TO HOW MANY PEOPLE ARE TALKING ABOUT IT IN THE REAL WORLD.

My biggest fear is that posts and memes about inflation are going to take over social media, and when the whole world is talking about inflation, its going to cause even more inflation by driving up people's inflationary expectations.

At some theoretical point people are going to lose their s**t when they feel this in the real world - maybe its gas at $10 a gallon? Maybe it's $15 bread? I don't know the threshold for real world panic, but can you see the risk here when you dump this gasoline on facebook, twitter and tiktok?

There are fears of inflation and stagflation but one of the key pieces missing in OP’s analysis is that a lot of the perceived inflation at the moment is not due to economics, but due to supply chains being massively disrupted by Omicron worldwide. Like in NYC you can’t buy a lot of s**t for example because products are not reaching the city easily, so shops are hiking prices because …. Well … because they can. This is giving people this impression of inflation but in reality it’s simply tied to supply shortages. Once those resolve, it won’t be hard to find those products and demand/supply principles will drive pricing back down. So while yes, there’s some inflation, a lot of it is going exacerbated by a temporary situation.

Global inflation will last throughout spring

Federal reserve just spoke today and the US government has no solution to stop the inflation.