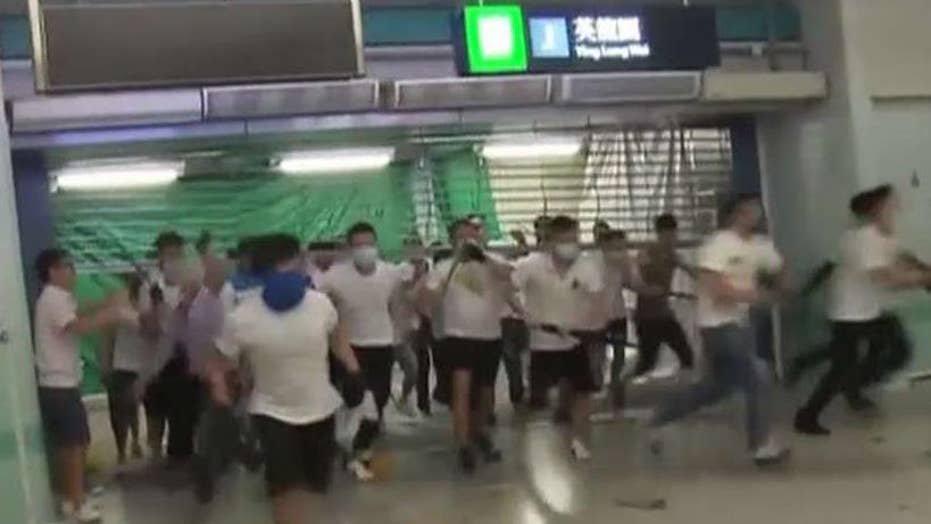 Dozens of people were injured at a subway station in Hong Kong on Sunday when a mob of masked assailants attacked protesters and passengers in a dramatic escalation of violence amid ongoing protests in the Chinese territory.

The sudden assault came after police fired tear gas at those who failed to disband after a massive march by demonstrators still fighting a proposed extradition bill and calling for electoral reforms in Hong Kong.

Dozens of men stormed the Yuen Long MTR station around midnight, forcing open closed entrances before hurling objects and assaulting protesters, in addition to passengers, at the subway station.

BREAKING: A video clip circulated online shows a group of men in white beat other passengers at Yuen Long MTR station.51311:55 AM – Jul 21, 2019Twitter Ads info and privacy1,011 people are talking about this

The attackers, meanwhile, were dressed in white and had black masks pulled over their heads. On Saturday, demonstrators had worn white at a counter-rally in support of police.

Footage from Apple Daily showed some of the attackers using umbrellas to beat people in the station and inside a subway car.

A live video clip shows passengers on board a train screaming in fear as a group of armed men in white wave their rods at them at Yuen Long MTR station.53712:09 PM – Jul 21, 2019Twitter Ads info and privacy842 people are talking about this

The South China Morning Post reported some people tried to fight back by hurling their helmets, and the Hospital Authority told the news outlet at least 45 people had been sent to nearby hospitals after the attacks.

Subway passengers, including one lawmaker, castigated police officers for allegedly failing to intervene.

Democratic lawmaker Lam Cheuk-ting told Reuters the men appeared to target black-shirted passengers who had been at an anti-government march. Lam, who was wounded in the face and hospitalized, told the news agency police officers on the scene ignored his pleas to step in and help stop the attacks.

Protesters trying to return home in Hong Kong were attacked inside a train station by assailants who appeared to target the pro-democracy demonstrators. (Lam Cheuk-ting via AP)

“They deliberately turned a blind eye to these attacks by triads on regular citizens,” he told Reuters, saying the floors of the station were streaked with blood. “I won’t speculate on why they didn’t help immediately.”

The Hong Kong government said in a statement shortly after midnight that commuters were attacked at a subway station in the city’s Yuen Long neighborhood, leading to “confrontations and injuries.” The statement also said some “radical protesters initiated a series of violent acts…despite repeated warnings” by police. They said the acts included hurling petrol bombs, setting fires and throwing bricks.

This Sunday, July 21, 2019, image made from a video, shows fighting inside a train car in Hong Kong. Protesters trying to return home were attacked inside a train station by assailants who appeared to target the pro-democracy demonstrators.(Lam Cheuk-ting via AP)

“This is absolutely unacceptable to Hong Kong as a society that observes the rule of law,” the statement said, referring to the acts of the subway attackers — as well as the protesters.

Protesters react to tear gas during a confrontation with riot police in Hong Kong Sunday, July 21, 2019. (Eric Tsang/HK01 via AP)

“Violence is not a solution to any problem. Violence will only breed more violence,” Lam said. “We absolutely do not tolerate such violence.”

Lam has declared the contentious extradition bill dead, but protesters are dissatisfied with her refusal to formally withdraw the legislation. Some are also calling for her to resign amid growing concerns about the steady erosion of civil rights in the city.

Officers fire tear gas and rubber bullets after protesters ignore commands and throw objects in the ongoing backlash over a Chinese extradition bill.

The march on Sunday had been peaceful when it reached its police-designated endpoint in Hong Kong’s Wan Chai district in the late afternoon, but thousands continued onward, at various points occupying key government and business districts.

Organizers said 430,000 people participated in Sunday’s march, while police said there were 138,000 during the procession’s “peak period.”

The group then headed for the Liaison Office, which represents China’s Communist Party-led central government within the city, where some protesters threw eggs at the building and spray-painted its surrounding surveillance cameras.

China’s national emblem, which adorns the front of the Liaison Office, was splattered with black ink. The Liaison Office said in comments published on Chinese state media that the acts “openly challenged the authority of the central government and touched the bottom line of the ‘one country, two systems’ principle.”

Hong Kong, a former British colony, was handed back to China in 1997 and was promised certain democratic freedoms under the framework of “one country, two systems.”

Fueled by anger at Lam and an enduring distrust of the Communist Party-ruled central government in Beijing, the current demonstrations have ballooned into calls for electoral reform and an investigation into alleged police brutality at the protests.

The Associated Press contributed to this report.