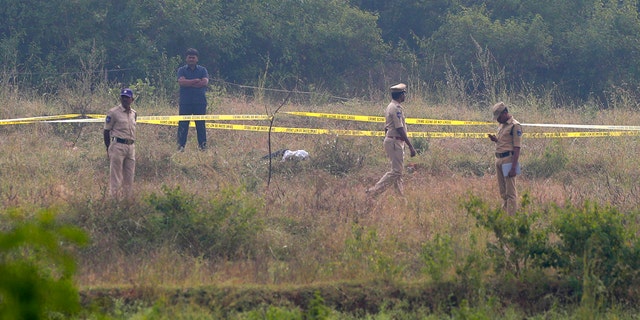 Indian police are being declared heroes Friday after they shot and killed four men suspected of raping and killing a young woman in southern India just a week earlier.

Last Thursday, the remains of a 27-year-old veterinarian were discovered by a passerby at an underpass in the town of Shadnager, near Hyderabad, after she left her scooter at a toll booth for a medical visit the night before.

The four men — between the ages of 20 and 26 — allegedly deflated her scooter and took her to a truck yard to repair it. Soon after, they assaulted and suffocated the woman before burning her body, according to Sky News.

The outlet reported the men had been taken into custody and escorted to the murder scene early on Friday for a crime reconstruction where they attempted to steal the guns of local police.

The men died in “crossfire” with police after trying to take the weapons, police said.

“While the reconstruction and investigations were on, one of the accused signaled to the others and tried to escape,” senior officer Prakash Reddy told the outlet. “They then tried to snatch weapons from the guard and fired on the police. They were killed in the crossfire.”

The officers who shot the men were hailed as heroes. They were showered with rose petals by residents in the streets of Hyderabad on Friday to celebrate what many believed was justice for the crimes.

The case had caused a national uproar in India, with one member of government calling for a public lynching of the accused. People poured into the streets — with firecrackers exploding throughout the city and traffic being halted to a standstill, according to the New York Times

“The law has done its duty,” V.C. Sajjanar, a top police official told the outlet.

Indian policemen stand guard the area where rape accused were shot on the outskirts of Chattanpally in Shadnagar some 50 kilometers or 31 miles from Hyderabad, India, Friday, Dec. 6, 2019. An Indian police official says four men accused of raping and killing a woman in southern India have been fatally shot by police. (AP Photo/Mahesh Kumar A.)

The victim hasn’t been identified due to India laws about naming sexual assault victims Her father told the news agency ANI that her daughter’s soul “will be at peace now.”

“It’s been 10 days to the day [since] my daughter died. I express my gratitude towards the police and government for this,” he said.

Local residents praised the police efforts on Twitter when the suspects were declared dead.

“I congratulate the Hyderabad police and the leadership that allows the police to act like police,” Rajyavardhan Rathore, a member of Parliament from the governing Bharatiya Janata Party said on Twitter.

People throw flower petals on the Indian policemen guarding the area where rape accused were shot, in Shadnagar some 50 kilometers or 31 miles from Hyderabad, India, Friday, Dec. 6, 2019. An Indian police official says four men accused of raping and killing a woman in southern India have been fatally shot by police. (AP Photo/Mahesh Kumar A.)

The killings also raise questions about vigilante justice in a country that has dealt with vast cases of violence against women.

“Maybe people are happy today,” Ranjana Kumari, the director of the Center for Social Research, told the New York Times. “But tomorrow you can pick up any four people and kill them for any reason.”

The news comes as a 23-year-old Indian woman was in critical condition on Thursday after being set on fire by two men she accused of rape. She was heading to court to give evidence against them in court in the northern state of Uttar Pradesh when they attacked her.

“Extremely sad and shocked to hear that the Unnao rape victim was burnt earlier this morning. If the culprits were not shielded and prosecuted on time this wouldn’t have happened. Complete state of lawlessness in the state of Uttar Pradesh,” Supriya Sule, a member of parliament for the Nationalist Congress Party, said at the time.

She was in critical condition with burns on 90 percent of her body.

Over 33,000 women were raped in India in 2017, according to the National Crimes Record Bureau of India.