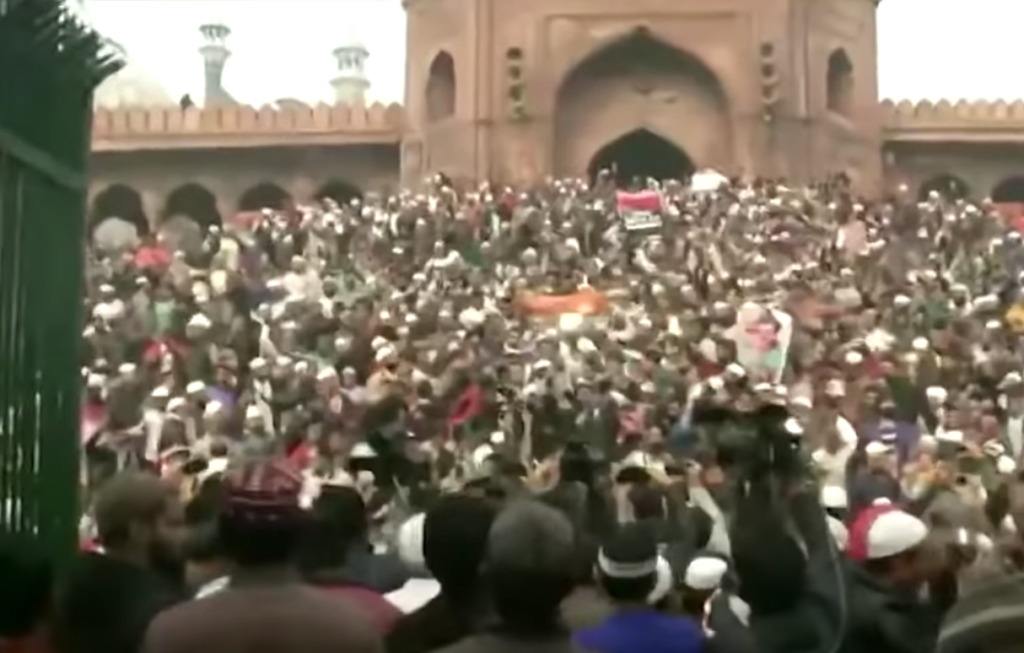 This photo of a protest in India is a screenshot from a YouTube video by Hindustan Times.

Ever since a new citizenship act in India was signed into law on December 12, protests have unfolded across India and the US, reports The Guardian.

The Citizenship Amendment Act (CAA) provides a path to Indian citizenship for Hindu, Sikh, Buddhist, Jain, Parsi, and Christian migrants from Pakistan, Bangladesh, and Afghanistan on the grounds of religious persecution, but the law does not provide eligibility to Muslims.

Multiple universities and other groups spoke out against the law for its exclusion of Muslims, and some of the protests sweeping India have become extremely violent. The death toll from the protests in India rose to 23 yesterday, according to Gulf News.

“We have watched this tragic unfolding of events with great concern and anguish,” said Ahsan Khan, president of the Indian American Muslim Council (IAMC). “The all India National Register of Citizens (NRC) and Citizenship Amendment Law will have a primal impact on the Indian polity. This is a step towards rupturing India’s social fabric and students should at the very least have the democratic right to protest.”

“Just like the immigrants are being discriminated and criminalized in the US, similarly the Muslims and other minorities in India are being criminalized because of the NRC,” said Alonso Espinosa from MIT Students Against War (MITSAW). “Our struggles are very similar and we have to fight these oppressive powers together.”

The US member organizations of the Federation of Aligarh Alumni Associations (FAAA) condemned the use of police force at Jamia Millia Islamia University (JMI) and Aligarh Muslim University (AMU). The FAAA is demanding a repeal of the law or an amendment that would “include all immigrants irrespective of race, religion, caste, creed, or nationality,” according to a statement from FAAA President Salim Shah.

Students of JMI, a predominantly Muslim school, claimed mistreatment by police during a protest last weekend. Police fired teargas and rubber bullets and used batons to beat demonstrators, according to The Guardian.

“They fired teargas shells at us, before they resorted to caning us ruthlessly,” said JMI student Iman Usmani. “They did not even spare the girls. I received several injuries mostly from the beatings by the police. I fell unconscious. Some senior students took me to a hospital where I received medical treatment.”

A press release from over 400 students and faculty from various universities in the US also condemned the violence at AMU and JMI, expressing solidarity with protesting students across India.

In addition, the Bay Area Coalition of Concerned Citizens in California and Indian students in Chicago held their own protests against the CAA.

“We are closely following developments (related to the) Citizenship Amendment Act,” said a US State Department spokesperson, according to the American Bazaar. “We urge authorities to protect and respect the right of peaceful assembly. We also urge protesters to refrain from violence.”

“Who understands the pain of refugees better than people of Delhi?” he asked at a rally this weekend, according to the Hindustan Times. “CAA is not taking away anyone’s citizenship. It, in fact, provides citizenship to the religiously persecuted minorities from Pakistan, Afghanistan and Bangladesh.”

AsAmNews has Asian America in its heart. We’re an all-volunteer effort of dedicated staff and interns. Check out our new Instagram account. Go to our  Twitter feed and Facebook page for more content. Please consider interning, joining our staff or submitting a story.