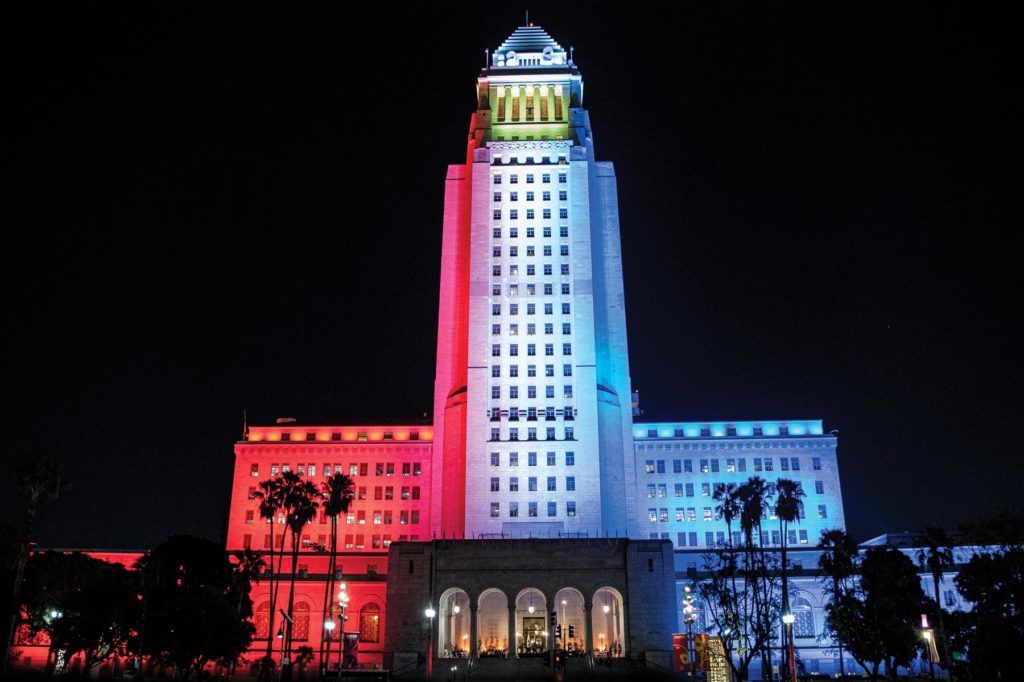 FOR the first time, Los Angeles City Hall was illuminated in yellow, blue, crimson red and white to represent the Philippine flag on Friday, October 25 during a celebration for Filipino American History Month.

The momentous occasion was witnessed by over 200 Fil-Ams representing local government, businesses and community organizations who gathered at the City Hall rotunda.

Under the administration of Mayor Eric Garcetti, there has been a record number of Fil-Ams appointed to high positions in the city, including Board of Public Works Commissioner Jessica Caloza, Board of Water and Power Commissioner Susana Reyes, and Deputy Mayor for Budget and Innovation Miguel Sangalang, who all came together to host Friday night’s event.

“It was a team effort at City Hall, and I worked closely with my Filipino American colleagues to host a historic celebration that connected the community, business, and government, because it takes all three sectors to move the needle and make lasting positive change,” Caloza, who led the organization efforts, said.

Caloza, who previously was director of scheduling for Garcetti, was appointed and confirmed to the Board of Public Works last spring, becoming the first Filipina in that position.

Reyes, a 32-year public service veteran, was appointed by the mayor in April to sit on the city’s Board of Water and Power Commission. Meanwhile, Sangalang has served as deputy mayor since 2017.

Caloza and Reyes called on Fil-Am community leader and Department of Building and Safety Commissioner Jocelyn Gaega-Rosenthal to help press the button to turn on the lights.

The energy-efficient lights on the building — designed by Filipino electrical engineer Fidel Onate of the Board of Public Works — continued to be on display throughout the weekend after sunset.

“They asked me to design the lighting here at City Hall…using energy-efficient lighting with the colors changing. It’s very ambitious but I said, ‘Let’s do it.’ I’m very proud to be Filipino,” Onate told the crowd.

After the lights turned on, Filipino global icon Jollibee made a surprise appearance to the amusement of the crowd.

A Filipino Jeepney courtesy of the Pilipino Workers Center was parked at the bottom of the steps of City Hall for photos.

“From the Jollibee appearance to having a Jeepney present to the lighting itself, we could not have done this without the love and support of so many people and organizations. That’s ultimately what this event is about — community,” Caloza added. “Most importantly, we want to continue to make City Hall accessible to everyone and raise the bar for how we recognize the contributions of Filipino Americans who play a critical role in shaping our beautiful city, and we are truly grateful to Mayor Garcetti for his ongoing support.”

With this year’s theme of “Pinay Visionaries,” Reyes highlighted how Pinays have contributed to the fabric of LA as well as the local community.

“We have plenty of them here in the city of Los Angeles and they are the backbone of our community and we want to acknowledge the work of Filipino American women and men in our communities today,” she said.

In previous years, the City Council has passed resolutions to mark October as Fil-Am History Month but this is the first year that a major event to honor the Fil-Am community and its history has taken place on City Hall grounds.

The program included a panel about engaging different sectors with the Filipino community and investing in Historic Filipinotown featuring Caloza, Gaega-Rosenthal and Dan Lin, whose production company Rideback Ranch has set up its offices in the neighborhood.

Prior to the program, guests enjoyed Filipino dishes and entertainment by Broadway performer Joan Almedilla, the Filipino American Symphony Orchestra (FASO), a cultural dance by Malaya Filipino American Dance Arts, and a DJ set by Micah Mahinay, who goes by DJ Noodles.