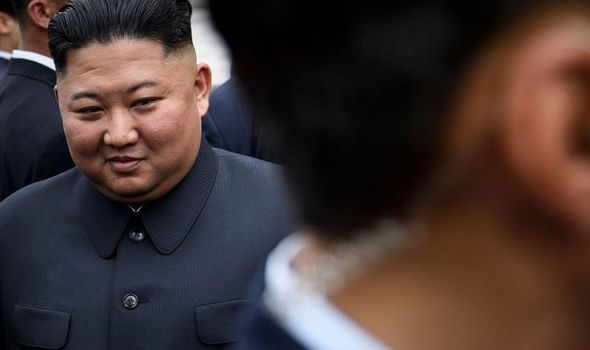 NORTH KOREA has embarked on developing a strategy for a deadly new weapon capable of replicating the death toll of a nuclear bomb, according to reports

North Korea has embarked on a new weaponry programme which has seen the nation syphon millions of dollars out of the banks of foreign nations, in order to fund its nuclear weapons programme, according to the United Nations (UN). The dictatorship has turned to sharpening its expertise in cyber-hacking, with Kim Jong-un seeming more than capable of hitting the heart of several international financial institutions.

According to the Associated Press, North Korea has generated almost $2billion (£1.6billion) in unprecedented cyber activities against finance institutions and unregulated cryptocurrency transactions around the world.

The large sum of money reportedly intended to fund North Korea’s nuclear weapons advancement, is being investigated by the UN.

Many fear that the most recent cyber attacks may soon go beyond the theft of money, with Jeremy Straub, an assistant professor of Computer Science at North Dakota State University, expressing his concern that cyberattacks could result in “mass injury and death rivalling the toll of a nuclear weapon.”PROMOTED STORY

The UN is looking into at least 35 instances of illegal monetary activity in 17 countries.

The fresh attacks may wedge a gap between Trump and Kim (Image: GETTY)

Some of the victims include Costa Rica, Gambia, Guatemala, Kuwait, and Liberia.

The countries hit typically have lower defence systems in place to prevent cyberattacks, leaving funds, both public and private, susceptible to rogue agents.

Of the nations targeted, South Korea is often the hardest hit.

At least 35 countries are said to have been attacked by North Korea (Image: GETTY)

Tackling this, the country started to bolster its cyberattack capabilities in the late 2000s in order to counter-sanctions imposed by the UN Security Council sanctions.

North Korea had for a short period toned-down its cyber endeavours, and, given that the country only has two internet connections, its attacking financial institutions via computers was almost overlooked.

Seungjoo Kim, a professor at Korea University’s Graduate School of Information Security, said North Korea’s ability to attack on such grand scales is because hackers go abroad to carry out the illegal activities.

The UN is currently investigating North Korea over the attacks (Image: GETTY)

“These repeated exercises help to improve their skills.”

Targeting financial institutions hasn’t been the only way North Korea has bared its technological teeth.

In 2014, the “Guardians of Peace”, a hacker group thought to be located in North Korea, furiously resounded to Sony Pictures for releasing the film, “The Interview”.

The film, a satire about Americans recruited to assassinate Kim.

This proved successful for North Korea, resulting in their gaining $101million (£81.2million) form five of the 35 fraudulent instructions they had sent out.

Around $20million (£16million) of this was traced back to Sri Lanka, and $81million (£65million) to the Philippines.

The level of the regime’s commitment to developing its cybersecurity capabilities aligns with its advancement in technologies such as nuclear, chemical, and biological weaponry.

North Korea’s cyberattacks are often handled as separate from other issues raised in the peninsula, which have, may reason, resulted in western powers often leaving strategic conclusions incomplete.

https://gulfnews.com/world/asia/philippines/gold-in-the-philippines-how-much-is-it-really-worth-1.1552204923140Dubai: Gold is one of the rarest and

Comment on NY Times recommended 300 times claims Asians only care about “status and income,” and don’t “help others.”
April 26, 2020 by kay
They usually just stick to themselves Forum reply »

Comment on NY Times recommended 300 times claims Asians only care about “status and income,” and don’t “help others.”
April 26, 2020 by Naval
I notice this pattern too.  Forum reply »

Comment on NY Times recommended 300 times claims Asians only care about “status and income,” and don’t “help others.”
April 26, 2020 by kzzz
fucking Americans think they’re the best, then attack others when ...

Trump to temporarily suspend all immigration into US to fight against ‘Invisible Enemy’
April 25, 2020 by Josanity gomez
Trump is trying to get vote from his base Forum ...

Pompeo blasts China for causing ‘enormous amount of pain’ and ‘loss of life’ with coronavirus coverup
April 25, 2020 by kzzz
The guy admits to lying cheating and stealing, you will ...

SPANISH GALLEON TRADE BETWEEN THE PHILIPPINES AND MEXICO
April 24, 2020 by Prau123
@rambo They used a lot of our pine trees and ...

SPANISH GALLEON TRADE BETWEEN THE PHILIPPINES AND MEXICO
April 24, 2020 by RAMBONIO
@prau123 that’s every ship in the 15 century.  Forum reply ...

SPANISH GALLEON TRADE BETWEEN THE PHILIPPINES AND MEXICO
April 23, 2020 by Prau123
I enjoyed reading this article but I’m sure it was ...
wpDiscuzComment Author Info
You are going to send email to
Move Comment