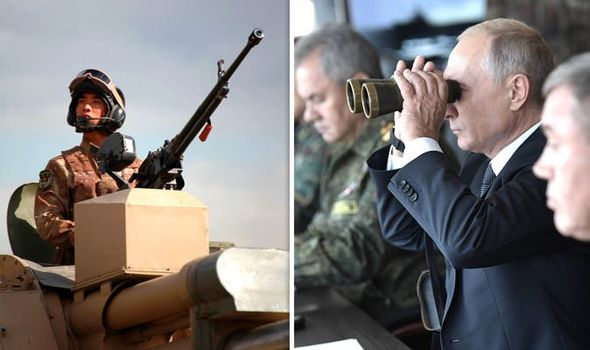 Russia will host the Tsentr-2019 strategic war drills next month in which over 128,000 military personnel from eight nations will take part. Beijing has pledged a sizeable number of soldiers alongside its aircraft contribution as the two nations continue to grow closer on a diplomatic, economic and military basis. The mass war drill comes a year after similar drills in Vostok which represented Russia’s biggest military exercises since the Cold War.

A Chinese Defence Ministry spokesperson said: “Under the consensus reached between China and Russia, the Chinese Armed Forces will take part in the Tsentr-2019 drills that will run in the Orenburg Region in Russia.

“The integrated grouping will be created using the forces of the Chinese Army’s Western Theater Command. It will comprise about 1,600 troops, 300 weapon systems and about 30 aircraft and helicopters.

“The drills are not aimed against third countries and are unrelated to the situation in the region.”

China’s troops will be part of the landmark Tsentr-2019 drills, in which soldiers from Russia, China, India, Kazakhstan, Kyrgyzstan, Pakistan, Tajikistan and Uzbekistan will take part.

It is intended to focus on the struggle against international terrorism in the region, according to the Russian Defence Ministry.

A spokesperson said: “Some 128,000 servicemen, more than 20,000 units of military equipment and weaponry, about 600 aircraft and up to 15 ships and supply vessels will be involved.”

Eight training grounds will host the drills in Russia, with some also taking place in foreign firing drills.

China linking up with Russia for military drills is nothing new, though.

It put some European diplomats on edge, with one saying: “While security cooperation between China and Russia is gathering pace, particularly in recent years, such close ties could make some small countries nervous – especially those that see Russia’s military aggression as a threat.”

The sentiment was echoed by international relations expert Jonathan Hoslag, who told the South China Morning Post that Western political circles were becoming increasingly concerned over the deepening Moscow-Beijing relationship.

He added: “The combination of the two countries, especially with Russia’s natural resources and China’s industrial prowess, would inevitably come as a big challenge to the West.”

Russia and China stepped up their military cooperation earlier this year when Moscow trained over 100 Chinese soldiers in using their S-400 missile systems.

He added: “The deepening of strategic ties between Russia and China may prove key in shaping the western Pacific’s geopolitical and geostrategic landscape over the next two decades.

“At this stage it is unlikely that Russia and China will enter a formal alliance – both nations are keen to retain some independence.

“But Western observers are sceptical about how long this will remain the case.”

There are wider fears from Washington officials that Trump’s blistering rhetoric and unilateral actions have started to isolate the US from its traditional allies.

Analysis from Express.co.uk suggests that, while animosity with China and Russia has continued to increase, Trump may also be weakening relations with the likes of Canada and Mexico.

Turkey and much of Latin America are steadily coming under Russian or Chinese influence, further hurting Trump against a Moscow-Beijing axis that is only growing closer and stronger.

Drills with Central Asian countries may also suggest that the two are taking full diplomatic control in the region.

Tsentr drills were last held in 2015 on a slightly smaller scale.

95,000 troops, including 170 aircraft and 20 warships, took place in conjunction with Kazakhstani forces.