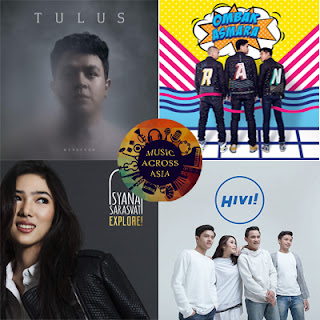 2:21:00 PMFEATURE , INDONESIANThere are lot newcomers in Indonesian music industry who rose last year, how about 2019? We made a special list about the best and most popular Indonesian pop music songs in 2019. Let’s see it:

How this list is generated: We researched some Indonesian music chart and picked some popular songs and put it in this list. Anyway, we also added some songs which released before 2019 that still popular until now. You can also share to our viewers your favorite Indonesian song in comment section, we are waiting for you!

Popular Indonesian Songs in 2019 that You Should Listen to:

A perfect song for you who can’t forget your ex dearest. Even breakup is not a hard thing to do, to forget the memories that we have with our ex isn’t easy as falling off a log. That it is what this song tell us about. An collaboration duet between Rizky Febian (who made his career skyrocketed with his debut song, Kesempurnaan Cinta) and Mikha Tambayong, two Indonesian young pop star.

Another song who got a big attention in 2019 is the latest single from another newcomers, Wahyu. A pop folks which combined with a reggae touch made this song so special and popular here. It’s an “official anthem” for you who still have no the lovers one. Oneday, we will get a love partner and it’s a God’s fate, so why should we in hurry and worried? just Selow (calm). That it’s what this song about.

Part of The Overtunes latest album Memories Made, “Bicara” is one of Indonesian song that became trending topic in Youtube Indonesia. This pop accoustic song make us go into the story of a lover’s conversation who expressed their love each other. “I just need a half of your heart to make me happy.” The Overtunes became famous when one of its member, Mikha Angelo compete in popular talent show, X Factor Indonesia.

An official theme song of the spin off from “Ada Apa Dengan Cinta?” movie, “Milly & Mamet”. “Berdua Bersama” make Jaz music career journey in Indonesia continues. Jaz is one of the rising star in Indonesia, The Brunei Darussalam-born singer who well received in Indonesian music industry with his single in 2016, “Dari Mata”. This romantic song is one of the most popular Indonesian song in 2019.

A sad story from famous Indonesian band, Seventeen. A tsunami that hit Selat Sunda last December made Seventeen lose its three members of four. Ifan, the lead vocalist, is the only surviving member of Seventeen. This tragedy makes the Seventeen song that released three years ago, “Kemarin”, got viral in 2019 because of the lyrics that really describe what they facing in December. Some part of the lyrics are “Yesterday you were still here with me enjoying this feeling, hope that all of this will have no end…, Now I am all alone, I couldn’t find you, I hope that you are in peace there, forever.”

A new song from the third place winner of Indonesian Idol, Virzha. This song tell us a story about person who really missing his dearest person. With this song, Virzha wanna express his love to his beloved dad. He told that the child’s love to his dad will never vanish. Have you listened to this song?

“Jangan” is a debut single from Marion Jola. In this song, he collaborated with famous boyband RAN member, Rayi RAN. After released in last June, this song easy listening and catchy song became one of the most played Indonesian song last year ’til now in 2019. Marion Jola previously was a contestant of Indonesian Idol, one of the most prestigious music talent show in Indonesia.

“Harta Berharga” was a iconic official theme song of popular TV show in early 2000s, “Keluarga Cemara”. In this year, a new “Keluarga Cemara” movie has just released and a pop star Bunga Citra Lestari is the one who sung a new arragement of “Harta Berharga”. This song make us realize that family is the most valuable thing we ever have. A typicial Bunga Citra Lestari (BCL) soft vocals combined with a calm music makes this song sounds so perfect.

Fourtwnty did an amazing job with his “Zona Nyaman”, a non-mainstream song genre (folk) that really popular in Indonesia now. This official theme song of “Filisofi Kopi 2” movie give the message to all of its listeners to never settle in his comfort zone, the youth must try to break the comfort zone. The “Zona Nyaman” music video in Youtube has been watched more than 76 million times at this list posted.
Tulus – Labirin (Maze)

An Indonesian pop star, Tulus released his new single called “Labirin”. The sounds instrument in this song are neatly blended to makes this song really amazing. This song tells us the story of a couple who love each other. This power of love made them want to explore each other’s, even it’s a “winding”, just like entering a maze. Labirin became one of the Tulus best and popular songs in this year.

So that is the list of best Indonesian pop songs in 2019. So in this popular song list, which one is your favorite song?
Don’t hesitate to write your favorite song and share it to our readers around the world. Feel free to share this list to your friends.
Hope you enjoyed our list, have a good day.