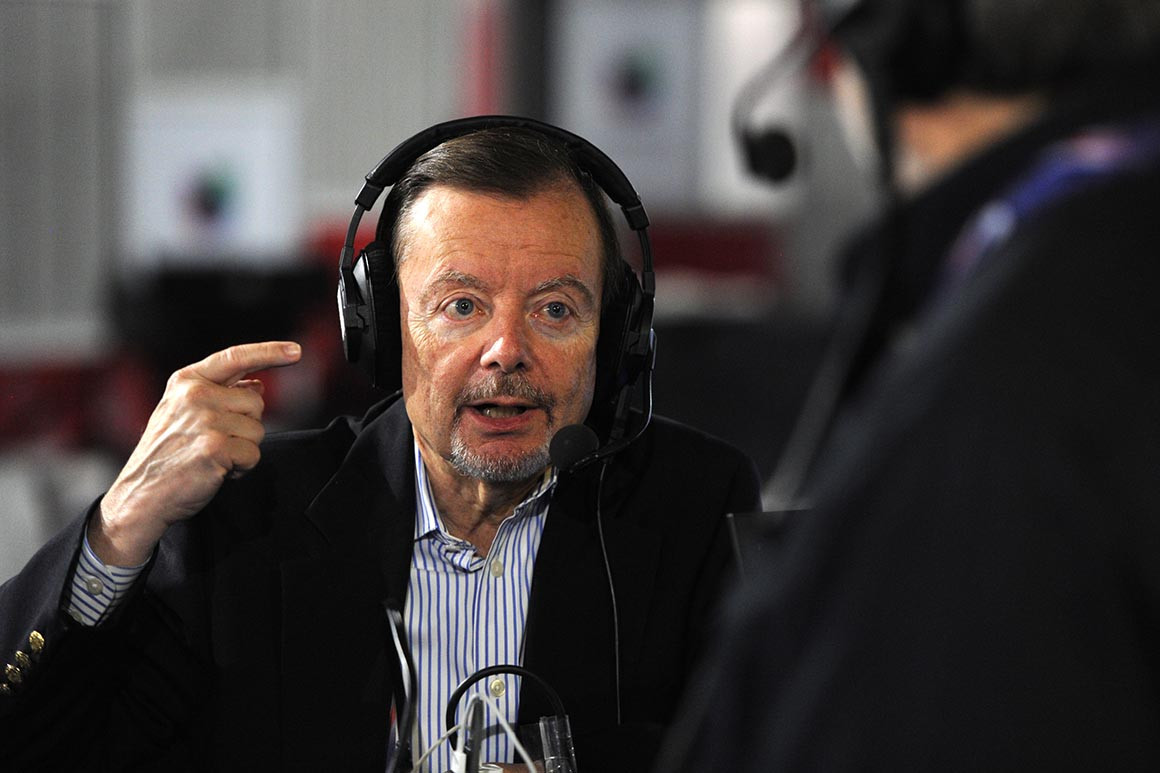 Evangelical leaders have long wanted Trump to press China hard on Christian persecution inside the country. Now, their focus is on its handling of a deadly virus.

Gary Bauer, a Christian activist, said he thinks Chinese officials will have to be held at least partly accountable for their initial handling of the coronavirus outbreak. | Ben Jackson/Getty Images

President Donald Trump’s evangelical boosters want China to pay a price for its handling of the coronavirus — preferably before voters deliver their verdict on Trump at ballot boxes this fall.

As the U.S. death toll from the viral respiratory disease surged past 10,000 this week, the president’s top religious allies joined a choir of voices urging him to punish China for its furtive mismanagement of Covid-19. Interviews with top evangelical leaders, many of whom have been in frequent contact with the Trump administration’s coronavirus task force, revealed a growing consensus that something must be done to hold China accountable and that Trump should take the lead in defining a suitable punishment.

Some said Trump’s lukewarm response to China’s leaders, who have been widely accused of minimizing their country’s Covid-19 outbreak earlier this year, is both a missed opportunity and an emerging political liability. The same day Trump signed a $2 trillion relief bill in March to address mounting economic instability inside the United States, he praised President Xi Jinping’s “strong understanding” of the coronavirus and said he had “much respect” for his Chinese counterpart.

Others said Trump’s No. 1 priority — besides containing the virus inside the United States — should be forcing the Chinese regime to take responsibility for the global pandemic.

“From the time he rode down the escalator at Trump Tower, President Trump made clear there would be a new sheriff in town when it comes to dealing with China,” said Ralph Reed, co-founder of the Faith & Freedom Coalition.

“China lied about the genesis of the virus and under-reported their own cases. These are actions that cannot be ignored and for which China must be held responsible, and I think taking action to do that only serves to deepen the president’s commitment,” Reed added.

The push for retaliatory measures by some of Trump’s leading Christian supporters underscores the dicey position in which he finds himself as the 2020 election closes in: forced to determine whether a laundry list of accomplishments, such as an intact trade deal with China, will carry him to reelection or if the deciding factor will be how voters score his handling of Covid-19. Part of that rests on whether his response to the Chinese government satisfies conservative evangelicals, a demographic that comprises much of his political base and which the Trump campaign has sought to grow in recent months.

“People don’t want China to get off scot-free,” said Republican Sen. Marsha Blackburn. “I think it’s important to realize there are lots of people who are very concerned with what has transpired, so of course they want China to be held to account.”

In an interview, the Tennessee senator said Trump needs to maintain a “working relationship” with Beijing as efforts to contain Covid-19 continue in the U.S. But she added that Trump cannot let China escape culpability for under-reporting domestic cases of the virus and inflicting damage on the global economy as a result of its cover-up. Blackburn has proposed legislation to reduce America’s reliance on China for pharmaceutical supplies.

CORONAVIRUS: WHAT YOU NEED TO KNOW

Democratic leaders released their own set of demands for an “interim” coronavirus relief package. The request could lead to another weekslong standoff in Congress.Confirmed U.S. Cases: 399,929 | U.S. Deaths: 12,911How coronavirus will change the world permanentlyCoronavirus cases, tracked state by stateDo you work for a hospital? Tell us what you’re seeing

“The ironic and disgusting thing about China is they get to both create demand and then fulfill demand,” said Gary Bauer, a Christian activist who was appointed by Trump to the U.S. Commission on International Religious Freedom.

“I think there’s a growing acknowledgment in the U.S. and around the world that China’s communist rulers are bad actors and, in some way, there has to be some sort of reckoning for all of this,” he added.

One popular proposal in evangelical circles, where some Trump allies remain wary of drastic retaliatory actions such as new sanctions, is for China to forgive a significant portion of the $1.1 trillion the U.S. government owes to it. The idea has been circulated by several Republican lawmakers, including Blackburn and South Carolina Sen. Lindsey Graham, who said “the whole world should send China a bill for the pandemic” during a Fox News appearance Monday night.

“I agree with Sen. Graham,” said Mark Burns, a South Carolina pastor and top Trump surrogate who wants the president to lead a coordinated international effort to hold China accountable for its Covid-19 response.

“It’s similar to when our founders began drafting the Declaration of Independence and they felt that Thomas Jefferson should write most of it because he was from Virginia, which at the time was the strongest and most powerful colony. President Trump should lead this response and rally other nations who have been greatly affected by the virus to challenge China on a major scale,” Burns suggested.

Securing such a commitment from other countries could prove difficult for Trump, who has banned exports of personal protective equipment (PPE) — the masks, gloves and protective clothing worn by health care workers who are treating Covid-19 patients. Several European countries whose health care systems have buckled under the pressure of addressing this pandemic have instead received PPE shipments from China, or from Alibaba tech titan Jack Ma. Medical supplies from China have also been sent to some U.S. states hit hard by the virus.

“The Chinese government helped facilitate a donation of 1,000 ventilators that will arrive in JFK today,” New York Gov. Andrew Cuomo, whose state has become the epicenter of Covid-19 in the United States, said at a news conference over the weekend.

The decisions Trump must make in the coming months regarding vaccines, the U.S. economy and China’s culpability in the coronavirus pandemic will be closely monitored by his religious allies, who have been kept in the loop so far about the administration’s Covid-19 response through White House conference calls and online prayer sessions. While the president is unlikely to lose the support of his evangelical fans — his proposed troop withdrawal from Syria last October was the only instance where multiple pro-Trump religious leaders criticized his actions — any misstep with China could handicap his campaign’s efforts to bring more religious voters into his base as the November presidential contest draws near.

While Trump has vacillated between lauding China’s “transparency” and labeling Covid-19 the “Chinese virus,” some senior officials in his administration have lobbed their own criticisms at Beijing for its ongoing response to the coronavirus outbreak, which is widely believed to have originated in the central Chinese city of Wuhan. In mid-March, White House national security adviser Robert O’Brien claimed China “cost the world community two months” of preparation by concealing the extent of the outbreak in Wuhan.

“I think we could have dramatically curtailed what happened in China and what’s not happening across the world,” O’Brien said at a Heritage Foundation event last month.

In a recent interview with Family Research Council president Tony Perkins, Secretary of State Mike Pompeo similarly accused China’s Communist Party leaders of putting “thousands of lives at risk” by engaging in an extensive disinformation campaign about the origins and severity of the virus. The Trump administration will “have to make some very important decisions” about the U.S. relationship with China once Covid-19 ceases to be a major threat to public health nationwide, Pompeo said.

“There will be a time not to cast blame, but to look at who did what and how we got here,” said Alveda King, a member of the president’s “Evangelicals for Trump” coalition, who believes Trump has “performed magnificently” in his response to China so far.

Calls for Trump to confront Beijing began percolating among his top religious supporters in late March, when prominent GOP figures like Sen. Josh Hawley of Missouri — to whom the president has taken a particular liking — publicly excoriated Chinese officials for costing the U.S. and other nations “tens of thousands of lives … and billions of dollars as a result of its lies.”

“The Chinese Communist Party has done everything it can to hide the origins of the coronavirus pandemic. Party officials interrogated and punished Chinese doctors who tried to warn others as the virus began to spread … they even sat on evidence showing the virus could be transmitted between humans,” Hawley wrote on March 30 in an op-ed calling for an international probe into China’s handling of the novel coronavirus.

Two religious leaders close to the White House cited Hawley’s op-ed as they discussed Trump’s dilemma with China. To them, an international investigation into Beijing’s Covid-19 response would allow for accountability without severely damaging U.S.-China relations — particularly as the Trump administration works to iron out the second half of a comprehensive trade agreement with China. On Monday, Trump said American farmers can expect China to continue purchasing farm goods at the levels they agreed to in phase one of the bilateral trade deal.

“We’re on a parallel track of trying to negotiate a trade deal and we do have an important trade relationship with China that we would like to enhance on our terms,” said Reed. “That being said, there’s no way something like this can happen and not cause some sort of revisiting in the relationship.”