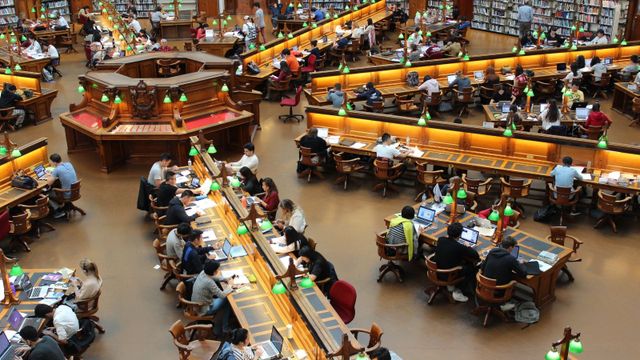 On Saturday, the Washington Post published an editorial giving its stamp of approval to a report by the Hoover Institution arguing that Chinese nationals and ethnically Chinese Americans potentially pose a national security threat to the United States.

The Hoover Institution declares that “it should no longer be acceptable that scholars, journalists, diplomats, and public officials from the People’s Republic of China be afforded unfettered access to American society.”

The Trump administration has moved to make visas harder to obtain for Chinese students. [Pixabay from Pexels, via Canva Pro]

The Post’s endorsement of this xenophobic demand comes in the form of an editorial demanding greater restrictions on visas to Chinese journalists wishing to enter and work in the United States. The editorial declares, “For many years, U.S. policy was guided by the logic that it is best to remain open, to showcase a commitment to values and principle.”

But now, the Post endorses the argument put forward by the Hoover Institution that, in response to Chinese limits on the freedom of the press, “the US State Department should respond in kind by restricting visas and access for Chinese journalists in the United States.”

The report calls for “reciprocal” limitations to be put on the actions of Chinese nationals in the United States: that is, for every curtailment of democratic rights in China nominally targeted against Americans, a reciprocal measure should be taken against Chinese nationals.

But given the severe restrictions on the freedom of expression in China, including massive internet censorship, this is an argument for nothing less than importing these very policies in to the United States, and targeting them on the basis of race.

The report, authored by Hoover instruction fellow Larry Diamond and Orville Schell, the director of the Center on US-China Relations, declares that the Chinese government sees “the whole worldwide Chinese diaspora” as “overseas compatriots,” owing a measure of loyalty to “the Chinese Motherland,” in what the report calls “racial targeting.”

The report declares, “Officials from Beijing have stated clearly that they do not view overseas Chinese as simply citizens of foreign countries,” but rather as “overseas compatriots” who have both historical connections and responsibilities as “sons and daughters of the Yellow Emperor.”

In response to this supposed threat by the “sons and daughters of the Yellow Emperor,” the report calls for “tit-for-tat retaliation.” It demands that “all American institutions—governmental and nongovernmental—that deal with Chinese actors should review their oversight and governance practices and codify and exemplify best standards of practice and due diligence.”

Given that the definition of “Chinese actors” is, according to the report itself, racial, the implications of these statements are sweeping. Every institution, from schools to theaters, must be on the watch for the supposed dangers posed by Chinese nationals and Chinese-Americans.

The Hoover Institution report argues that China is engaged in a “discourse war” through “its surging media presence, the growing number of visits and exchanges of all kinds, the expansion of philanthropic activities.”

In the distorted view of the report’s authors, all cultural, and intellectual exchange between the United States and its largest trading partner is a means of foreign “subversion.”Article continues below the form

The authors of the report praise the direction taken by US policy on China, having “a series of new initiatives… issuing forth from both the administration and Congress, suggesting a rapidly changing landscape for US-China relations.”

This “tidal shift now emanated not from Congress alone—where it had strong bipartisan support—but also from the White House and National Security Council, the Pentagon, the Office of the US Trade Representative, the Department of the Treasury, and even the Department of State.”

The report gloats, “As sentiment shifted away from hopes of finding common ways to collaborate,” a spate of new US policy initiatives have ensured that “Chinese influence on Capitol Hill has reached a low point.”

The report praises actions placing restrictions on Chinese Americans, including reductions in the duration of student visas put in place by the Trump administration last year.

The Washington Post, owned by American retail oligarch Jeff Bezos, who operates a network of fulfillment centers notorious for their exploitative conditions, has, over the past two years shifted to an increasingly anti-Chinese position, arguing that the interests of American corporations like Amazon are best served not by cooperation with, but struggle against, their Chinese competitors.

In this, the Post has paralleled the shift in opinion within the Democratic Party and its quasi-affiliated news outlets, including the New York Times, which have largely embraced the anti-China platform pioneered by fascist ideologue Steve Bannon as head of Donald Trump’s 2016 election campaign.

In recent months, the Trump administration has massively intensified its trade war with China, and has withdrawn from the INF nuclear treaty in order escalate its military buildup against China.

The attitude of the Times was summed up in a headline by columnist Roger Cohen: “Trump Has China Policy About Right.”

America has a long and dirty history of ethnic discrimination against its Chinese minority, which was among the most exploited sections of its working class. It is no surprise that, in adopting Bannon’s anti-Chinese policy, the Post is increasingly open to the racist subtext of his fascistic politics.