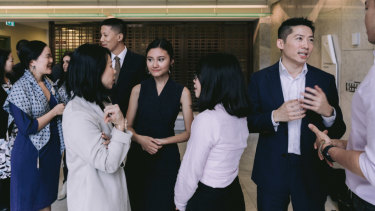 Australians from an Asian background are the most likely ethnic group to report experiencing discrimination as consumers or employees.

Most Asian-Australians reported being discriminated against at shops and restaurants, followed by in the workplace or educational institutions.

Researcher Nicholas Biddle, the associate director of the ANU Centre for Social Research and Methods, said self-reported discrimination was a relevant measure even if it was an over or under-estimate in reality.Advertisement

“It's a description of people's experience and if people are experiencing discrimination in the job or in education, then they're more likely to disengage from those types of activities.”

Dr Biddle said the survey respondents defined their own ethnicity and could nominate more than one. Since the respondents were also asked about country of origin, he was confident the term “Asian-Australian” covered people with a family background from both East Asia and South Asia.

Tuanh Nguyen, a director at consulting firm PricewaterhouseCoopers and one of the organisers of the recent Asian-Australian Leadership Summit, said a number of studies suggested while Asian-Australians represent 12 per cent of the population, they only accounted for 3-5 per cent of senior leadership positions in business.

Some people refer to the barrier faced by Asian-Australians to be promoted to senior leadership as the “bamboo ceiling” - though Ms Nguyen said there was debate about this term given bamboo implies China or East Asia.

Ms Nguyen said the barriers included systemic racism and prejudice - including “unconscious bias”, which refers to attitudes that people are not aware they have. Another barrier was that many Asian-Australians had a cultural upbringing that imparted values such as deference to elders and senior colleagues and promotion of harmony over “rocking the boat”.

“These cultural values then get imported into the way these Asian-Australians operate in the workplace and as they progress through to senior leadership level those values and qualities are seen as inhibiting ability to progress,” Ms Nguyen said. “The leadership model here is more the ‘squeaky wheel gets the grease’ - that is, the person who speaks up and is self-promoting and has the ability to network are the ones who are going to get noticed and promoted into senior ranks.”

Ms Nguyen called for a reappraisal of the qualities that people from other cultural backgrounds might bring to a role and an understanding that a leader might look different to the traditional mould of “a six-foot, well-dressed man”.