Here's an update on some of the new discoveries in recent years in the Mesoamerican region.

It's debatable since El Mirador is actually 172 meters tall.

The largest structure is still Cholula.

15 facts about the Maya Civilization

1. THEIR PYRAMIDS AND CITIES ARE STILL BEING DISCOVERED.
It’s amazing to think that something as large as a pyramid could elude archaeologists today. But it was only a few years ago that a Maya pyramid more than 1000 years old was discovered at Toniná in the Mexican state of Chiapas. It had been hidden under what was believed to be a natural hill. In 2015, researchers said this newfound monument was actually Mexico’s tallest pyramid at 246 feet (75 meters) in height, surpassing the 213-foot Pyramid of the Sun at Teotihuacan. The ruins of two Maya cities concealed by thick vegetation were also recently discovered in Mexico’s state of Campeche.

They also found El Palmar and Angamuco a few years ago also.

It’s 40 times larger than we thought it was,” Garrison says. “This is now this huge city that would have been a rival to Tikal

An early city called El Palmar seemed now to be 70 times larger than we had suspected, with raised fields for agriculture. An “isolated” royal palace had an extensive swath of settlement extending a kilometer or more.

A new laser-mapping technology, called lidar, has been used to confirm a truly mind-blowing ancient city buried in western Mexico. Called Angamuco, researchers say that it has about 40,000 buildings. This is around the same amount of building foundations as there are in Manhattan, New York. Whoa!

@prau I love your post. I am going to transfer all yours, mcdreamymd, easy772 to the blogging section.

here is an example.

you should give power to selected regular users to post in the front page.

I have been asking for that and no answer

anyone gotten that yet?

that would be cool

Mound building was also being constructed in South American countries such as Uruguay, Argentina, Brazil and Paraguay. They are mainly located along the Rio Parana. Like the mounds in North America, there are several thousands of them. They are more concentrated in one location compared to their North American counterpart. These mounds are not as big as the North American mounds such as Monks mound in Cahokia mound. They are among the many archaeological sites in the New World that needs further research.

Video:   Press "Play" and the video will begin.

Who really invented the game of Monopoly?  The game is often credited to Lizzie Maggie in 1902 and she named it The Landlord's Game.  There are sources saying that the game was invented by Kiowa Indians of Oklahoma in the 1800's and called it Zohn Ahl.  She was a friend of Stewart Culins, the author of the book Chess and Playing Cards(1898) in which the game Zohn Ahl is described.  The article below on Monopoly is from page 23 to 30.

There are some board games today that have not been credited to earlier versions such as Othello. It appears Othello had it's origin from a game called Ming Mang in the 13th century from Tibet.

Welcome Prau! I missed you from our Eastbound days.

Thanks. Took awhile but good to see you and everyone else in here.

Have any of you ever visited an actual Pre-Columbian archaeological site before in America?

I've seen a few only and here's some that I've visited before.

and some more cliff dwelling sites located in the southwestern region.

And what archaeological site(s) would you like to visit in the next few years?

I would like to visit the Topoc Maze(Mystic Maze) which isn't too far from the Intaglios Geoglyphs. The Topoc Maze is 600 plus years old and it was created by the Mojave Indians. I do get the impression that people who visited the archaeological sites in Latin America would rather take a tour guide first unlike here in the U.S.

I did forget to mention that I visited Pu'uhonua O Honaunau National Historic Park.

I've also looked at several indigenous totem poles before in the Pacific Northwest.

I am very impress with your knowledge of Latin America. Filipinos seems interested in us.

Since we live here, it make sense for us to know the culture, history and archaeology of the indigenous people in America.

There are a lot of popular destinations to visit for starters.

First-timers usually starts off visiting the top tourist spots such as  Machu Picchu and Cuzco in Peru and/or Teotihuacan and Tikal in Mexico and Guatemala.

There are a gazillion archaeological sites to visit in Latin America today and they are excavating a gazillion more for future tourism also.

There are only a few language family in the world that equal this feat of expansion during it's time. Example, Austronesian language family expanded throughout Southeast Asian continent and island archipelagos, throughout the Pacific Islands, as far west in Madagascar and as far south in New Zealand.  The family language began expanding at least 6,000 years ago.

I posted the Austronesian map separate as you can see it's located in the next post because the Wikipedia map of Southeast Asia won't allow me to post it here.

Another example is the Indo-European language family which originated in Urartu or somewhere in the Eurasian Steppe of Central Asia around 5,000 years ago. The language branches are predominantly found throughout Europe, Western parts of Asia and throughout the Americas and it represents 47% of todays languages. 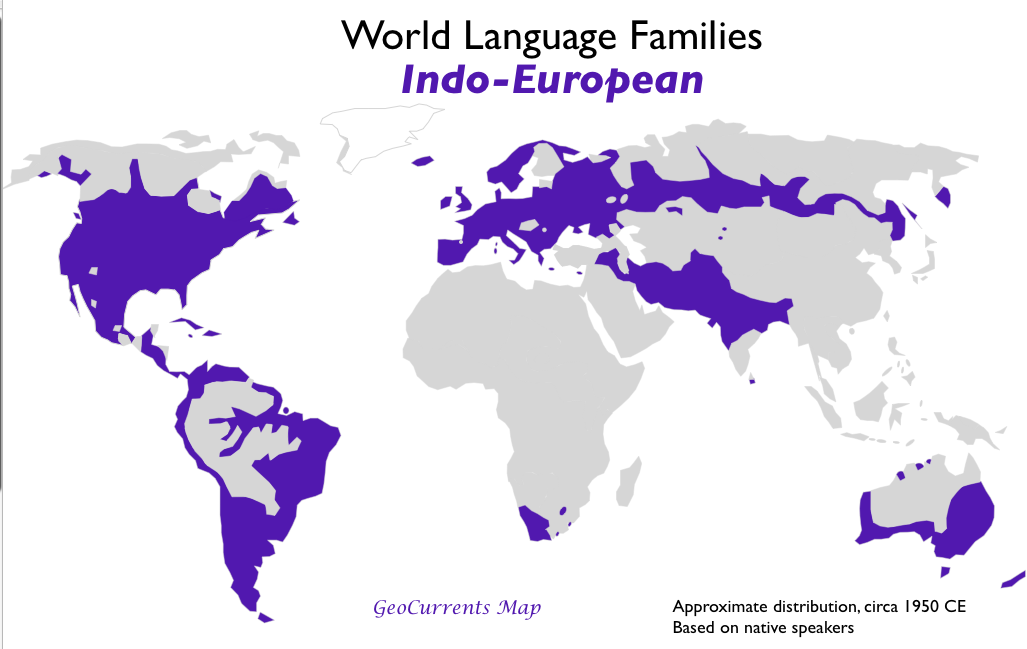 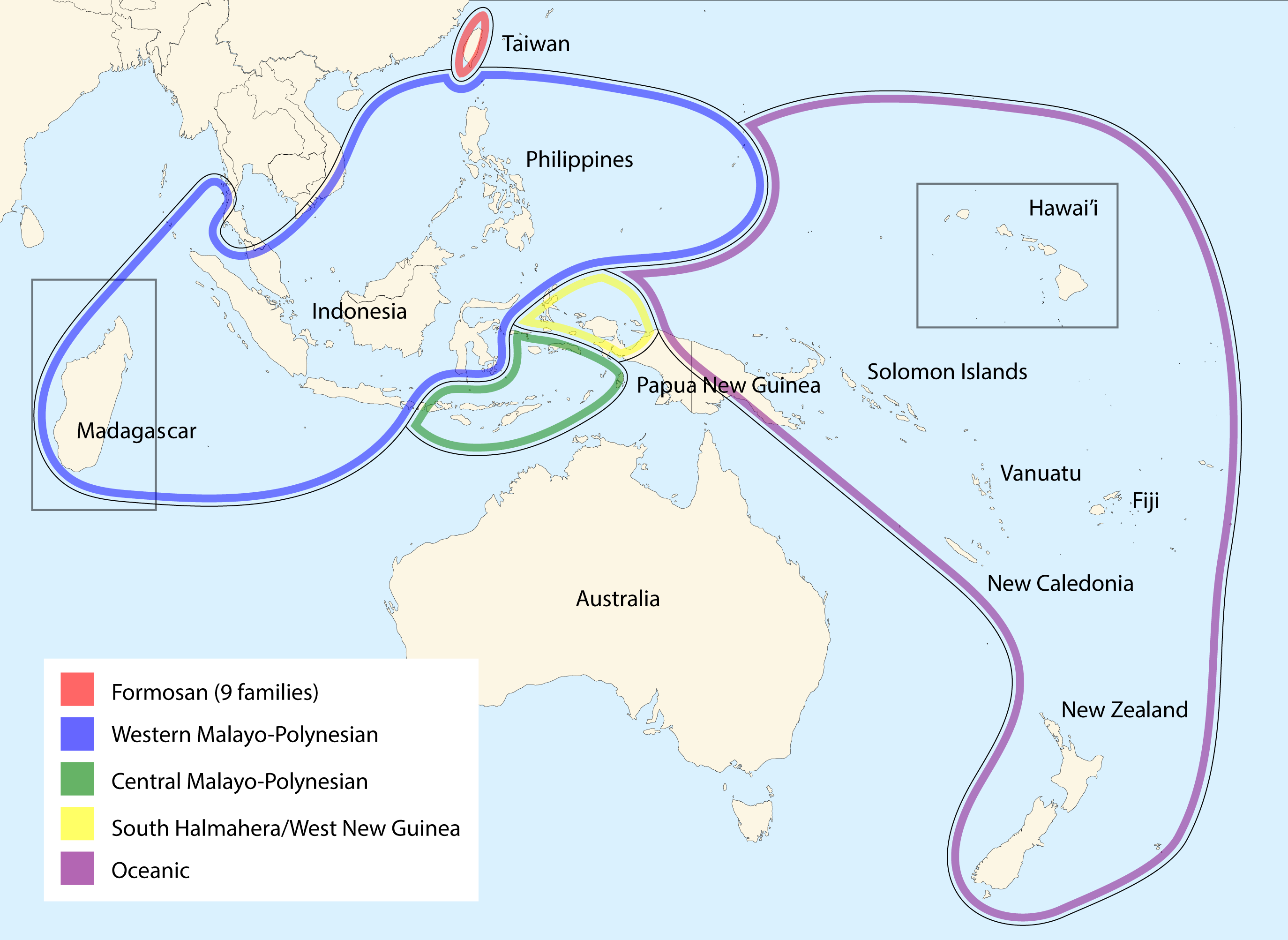 Several language families have expanded and several have been displaced or wiped out unfortunately.