LOL at fat Manila kids that only know how to play video games. -l**o

Kudos to those who advocate the continuance of our culture, esp. the Igorots, that's amazing how the local govt. is really fighting for their culture.

PS And kudos to that guy who spoke perfect Tagalog, it got me teary eyes when he said "diwa ng Filipino laro ng ating lahi..." who the says poetic shyet like that anymore. -laugh

PSS The one game that they don't show is Moro-moro.

bottle caps
"text"/cards
rubber bands
jolens (both the jolens ala billiards, and jolens as 'money')
cheap one peso plastic figurines (usually that comes in candy or chips)

things you have to construct:

sumpit (made blow pipes out aluminum piping, steal the withered flowers that people put in the graves/grave markers during All Soul's Day, harvest the seeds in the flowers, attach a empty matchbox with tape, use the seeds as ammo -laugh)
cannons (we'd make them out of soda cans and lighter fluid)
'pill box' (we'd take apart firecrackers and put all the in a cardboard box and then use string from a candle for fuse and then light it up)
Filipino blowing bubbles (I think this is traditional, usually you get an empty can, start a fire put water, some soap, smashed flower---usually hibiscus and some other stuff, let it boil and then you blow bubbles out of it)
saranggola (kites) fighting (we'd break glass into fine powder, buy glue and boil it with the glass, and then soak the yarn)
Espadahan (fencing using dried coconut leaves' vein fiber or we'd make it ourselves from whittling soft wood like bamboo)
toy boats (during the floods we recycled old rubber sandals and old motors from RC cars, make the hull and outrigger from stitched sandal rubber, using tingting or banana cue sticks for rigging and mast, plastic bags as sail, then we'd somehow rig a 9 volt battery with the RC motor using electric wire and you're good to go -laugh)
we fished out of yarn and stick (we usually catch "dirty fish" like hito so we threw them back)

habulan, taguan but in the rain
paper boat racing in the canal (paper boats, blow and let the raging flow of water carry it down the end LOL)

Now I think about it, games we played were full of sharp objects, explosives, flammables, gambling and cruelty to animals...no wonder kids nowadays are being kept inside by their parents and getting fat. -laugh

PS Bahay bahayan we weren't allowed to play, because my mom said uh...it's inappropriate esp. with girls even if we were so innocent back then. -l**o

PSS I found this old Batibot clip about 'bangkang papel'

I don't know the species that they use in the Philippines but they're not that big and despite having different colors I'm sure it's from one specie.

This one is in Guam they're bigger (twice) than the specie they use in the Philippines. I think they're the same colorful (bright yellow) specie in Hawai'i (except the one in Hawai'i aren't aggressive at all, they usually won't fight).

This one is in the Philippines, they're smaller and much more aggressive.

^Surely. You can find plenty of spiders on trees as far I can remember, but they're not the same specie as those that are popular for fighting. The ones we used for play were the very aggressive and venomous ones. -laugh

Boys usually played with insects. I remember hunting for grasshoppers and dragonflies. I remember once there was a small group of kids with a girl I really liked trying to catch dragonflies, they usually land on lillies or plants on water so there they were just hanging out near a small pond of muddy water where water buffaloes lay during hot days, I tried to reach out for a dragonfly that was a foot out in the water I reached for it and since it was muddy I slipped and fell. All the kids were laughing even the girl, so I was so embarrassed I ran home knowing full well my mom was going to kick my azz for smelling like sewer water and my white sando was soaked in black mud. -l**o Sometimes we catch those and ugly bugs like beetles the girls are scared of them so we chase them around with it. -l**o

This one is dampa (use palms to create wind to push rubber bands across...the shorter amount of 'strokes' = won the race).
[IMG] 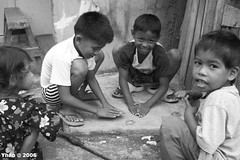 It's funny now I think about it...half of the time we played make believe gambling games (instead of money we used cards, bottle caps, rubber bands, plastic/rubber figurines) no wonder some Filipinos get addicted later on with real gambling. -l**o

what philippine games have you played as kids?
i got to play:

forgot the names of the other games i played.
eh even for those of my generation who live mostly in the city have not experienced these.
i remember as a kid when i'd visit my cousins in the city, we mostly played cards, jackstone, "bored" games or just watched tv

what pinoy games have you played?

[MENTION=1596]jaywhat[/MENTION] did you play this game? I remember playing it.

I didn't know it's native, here are some Lumad kids playing it.

Coconut-shell walking.  According to the video below it's called Karang in the Philippines especially in Bohol.  I wonder what other names it goes by.

Talong (eggplant) race.  You will usually only find this game in parties.  Talong is after all a vegetable (or is it a fruit) that one should not waste.

Rubberband Tricks (Cat's Cradle).  If I remember correctly, making figures with rubber bands was a common activity in the past in the Philippines.